An amazing opportunity arose last week, for all budding historians of St Marylebone school. Hephzibah the daughter of Zahava came to talk to us about her mother’s experience during WW2 and the traumatic events that she encountered, simply because she was Jewish.

Zahava was born in Palestine before WW2 to a Jewish family, which included her, her brother Jehudi and her parents.

When the Nazi occupation of Holland began in 1940, Zahava and her family were forced to be smuggled out of the country, however, there was a massive worry that Zahava’s younger brother Jehudi, might make noise during the trip, resulting in them being caught. After much deliberation, this led to him being handed to the Dutch resistance and living with them until the end of the war.

During this time, Zahava and her parents were sent to Westerbork, a transit camp, where they lived in horrifying conditions. They were forced to survive on essentially no food and sleep on planks of wood. Zahava talked about her mother’s most vivid memory about role call, which was when every member of the camp had to stand outside in lines for hours on end, often in thick layers of snow while they were wearing little to no clothing.

This was an effort by the Nazis to humiliate and essentially let people die slow and painful deaths. After a period of time spent at the camp, Zahava’s family had been placed on the lists for those who were going to be transported to Auschwitz, an extermination camp, where most likely Zahava and her family wouldn’t have survived. By a stroke of luck, they were able to avoid being transported and stayed in the camp until its liberation in 1945.

Many unique artefacts were shown by Hephzibah throughout the talk, such as the tin bowls used in the camp and a photo from the Dutch resistance that was smuggled in through a bag of raw beans. The photo was a picture of Jehudi who was no longer a baby, but a young boy. Eventually, at the end of the war, the family were reunited and after practically losing everything, their friends, family and possessions, Zahava and her family started to rebuild their lives. Only in recent years has Zahava started to share her story with others and written an awe-inspiring book Fragments of a lost childhood.

Hephzibah’s talk reminds us that the holocaust and all those who suffered under the Nazi regime should never be forgotten, they still affect the lives of their survivors and future generations.

Written by Ava 9B 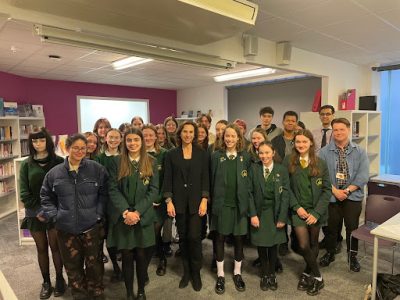 We use cookies on our website to give you the most relevant experience by remembering your preferences and repeat visits. By clicking “Accept All”, you consent to the use of ALL the cookies. However, you may visit "Cookie Settings" to provide a controlled consent. Cookie Policy
Preferences
Accept AllReject All
Manage consent

This website uses cookies to improve your experience while you navigate through the website. Out of these, the cookies that are categorized as necessary are stored on your browser as they are essential for the working of basic functionalities of the website. We also use third-party cookies that help us analyze and understand how you use this website. These cookies will be stored in your browser only with your consent. You also have the option to opt-out of these cookies. But opting out of some of these cookies may affect your browsing experience.
Necessary Always Enabled
Necessary cookies are absolutely essential for the website to function properly. These cookies ensure basic functionalities and security features of the website, anonymously.
Functional
Functional cookies help to perform certain functionalities like sharing the content of the website on social media platforms, collect feedbacks, and other third-party features.
Performance
Performance cookies are used to understand and analyze the key performance indexes of the website which helps in delivering a better user experience for the visitors.
Analytics
Analytical cookies are used to understand how visitors interact with the website. These cookies help provide information on metrics the number of visitors, bounce rate, traffic source, etc.
Advertisement
Advertisement cookies are used to provide visitors with relevant ads and marketing campaigns. These cookies track visitors across websites and collect information to provide customized ads.
Others
Other uncategorized cookies are those that are being analyzed and have not been classified into a category as yet.
SAVE & ACCEPT
Powered by